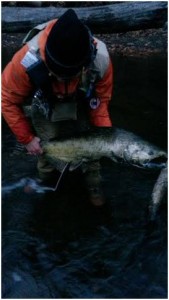 If you tuned in last week, you read about how Paul and I prepped for our New York fishing trip. Now it’s time for the interesting part where you guys get to hear about all of the fun we had.

Leaving State College around 4:00 PM — big thanks to George for letting us head out of work early to miss the PSU football traffic — we got into our room at Lake Alice Cottages a little after 10:00 PM. Knowing that there was a long day of fishing ahead of us, I decided to tie up some last minute flies and get a snack in me before hitting the hay. 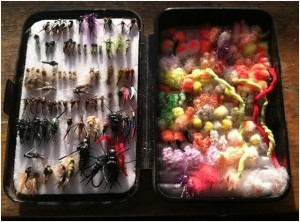 As my 5 AM alarm sounded, I knew I was less than an hour away from getting to experience a stream filled with incredibly large brown trout, salmon, and steelhead. I was downright stoked about this. After a quick breakfast, we piled into the car and headed for the creek.

Upon arrival, we were greeted with a ton of cars in the parking lot, and as we made our way down the hill to Oak Orchard Creek, we came across what looked like a graveyard for salmon. This was odd. Neither Paul nor I had ever seen anything like this post-spawn war-zone. After investigating what appeared to be a mass salmon murder, we tied on some flies and made our way to one of the only holes devoid of other fishermen.

It didn’t take long before I saw an enormous fish, a size that I’ve never seen in any Pennsylvanian stream. It goes without saying that this made me pretty darn excited.  I tried throwing just about every decent looking fly in my box, but I just couldn’t buy a strike. I’m sure I don’t need to tell you all how frustrating it is to see such wonderful fish but still come up empty again and again.

With very little success and a growing crowd, we decided to hit a tributary of Oak Orchard in hopes that there would be less people. On one hand were we right about the lack of people; on the other, there was also a severe lack of fish in the stream. We walked a decent length of it and only found one dead salmon before we decided to head back to Oak Orchard.

This time around, I figured I would explore the rest of the creek. In doing so, it didn’t take long before I had hooked into a fresh steelhead, but a poor hookset enabled that fish to get away as quickly as she came.

Continuing the trek upstream, I came across a logjam without people that just looked too fishy to pass up. Finally, I was greeted with my first steelhead of the trip. Sure, it was only a small one that fell victim to a yellow glo-bug, but it didn’t take away from my excitement. 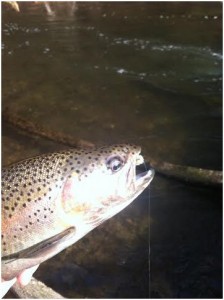 My journey upstream continued, but due to crowds, I was doing more walking than fishing. As I headed back downstream, I found a hole that had the right amount of people (zero) and the right amount of fish (plenty). I called Paul upstream to this spot, which is where we finished the evening off. I landed a pretty brown, and Paul a salmon. The day may have started slowly, but it ended in a nice way.

The second day approached, and with an earlier start, we began scouting some holes that I had been to the day before. We arrived at a prime looking hole that wasn’t yet filled with masses of people. As soon as we got there, I was blessed with finding a nice reel case (a big thank you to the person who lost it!). Unfortunately, we didn’t get into any fish here, so we continued upstream until we got to a nice stretch of water.

Here our luck changed. I hooked into a nice steelhead almost immediately, and then had another break off mid-way through the fight. I was bummed about not landing them, but just having them ripping line off of my reel was enough satisfaction. After dredging this hole, we worked back downstream, where I picked up another steelhead from the same hole as I did the day before and then a brown from a hole below that. We were finally hitting our groove. Of course, as the day progressed, we were met with fishing that wasn’t all that great. A few hook ups here and there, but nothing too exciting.

Well, that was until I stumbled across a very large brown trout near the shore. Thinking that catching this fish was next to impossible, I went in fairly pessimistic. I began by throwing the standard eggs its way, but that fish was less than interested. After floating eggs by it for a few minutes, I decided to tie on a flashy looking caddis larva; wishful thinking I thought, but still worth the effort. It took only a few drifts before this fish gobbled up my fly, and I was met with exactly what I was looking for out of this trip: a large, lake-run brown. I horsed this fish in for fear of losing it, snapped a few pictures, and then revived and released it for another day. 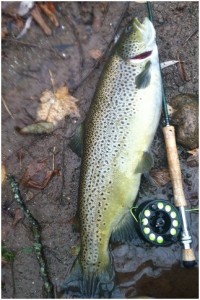 After the excitement of this fish wore off, we made our way back downstream and decided to get an early start on the drive home. Could I view my first trip to Oak Orchard Creek as anything less than a success? Not in any way, shape, or form. I would certainly make this trip again given half the opportunity. It is truly a wonderful fishery. Though we didn’t catch all that many fish, I saw a ton of fish that were larger than anything I have ever seen before, and that alone is enough to keep me coming back.