On Christmas day, the Centre Country region lost an outdoor icon when Tom Thwaites passed away at the age of 83.

Tom was a busy man, balancing his love for the outdoors with his professional work. From 1959-1989, Tom taught physics at Penn State and acted as the faculty advisor for the Hiking Division of the Penn State Outing Club.

Perhaps Dr. Thwaites’s most noted accomplishment, and one that will impact adventurers for years to come, was blazing the Mid State Trail. Starting in 1969 and lasting for the better part of 2 years, Dr. Thwaites and members of the Penn State Outing Club traversed the entirety of the 95 mile trail, clearing the way for future hikers. By 1972, the first trail guides were prepped for publication.

Many of us today take for granted the MST’s existence, but back in the early 70s, Dr. Thwaites and the Penn State Outing Club were setting up the foundation for hikers enjoying the trail for years to come. Now, you can find websites and several books dedicated to the MST, but it all started with Dr. Thwaites. If you’d like a more extensive breakdown of the history of Dr. Thwaites blazing the Mid State Trail, be sure to check out A History of the Mid State Trail.  It was written by Scott Adams in collaboration with Tom himself. 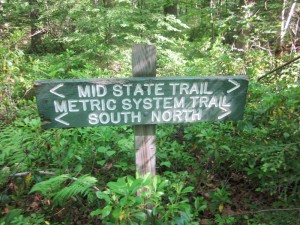 Geoff Brugler, Appalachian Outdoors’s owner, wanted to honor Tom Thwaites through our blog as soon as he heard of Tom’s passing. However, I didn’t feel capable enough of capturing the life of Dr. Thwaites on my own; I knew of his accomplishments, but I’ve never personally met him. Instead, I decided to reach out to some of his friends — people that truly knew Tom — and dedicate this week’s Five on Friday to him.

Below are just some of their memories, thoughts, and experiences with Tom. Feel free to add to the discussion with some of your own. Even if your memory consists of trekking the MST yourself, we’d love to hear your story. I’m sure Tom would have loved to hear it too.

1. Ben Cramer
Back in the day, I was into easy state park-style hiking. Around 1996 I decided to make it a serious hobby and went to the bookstore to find a beginner-to-expert level guide. I bought 50 Hikes in Central Pennsylvania by Tom Thwaites.

That was more than 4,000 miles ago in my hiking career, during which I crossed paths with Tom several times. I have since written two books and dozens of newspaper columns on the topic, all directly inspired by Tom’s books.

For any hiking trail in Pennsylvania, if Tom Thwaites did not build it himself, he got people on it, including me. 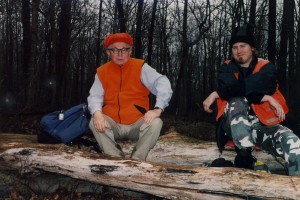 2. Scott Adams
My most impressionable memory of Tom was my first encounter with him. It was in 2007 at a Mid State Trail Association meeting in Morris, PA. I had been hiking for a number of years, and I knew of Tom from his books, trail guides, and impressive rock monument near Little Flat on the Mid State Trail. I was a bit intimidated when I was first introduced to Tom, afraid to share my hiking adventures with this icon of hiking. I was quickly put at ease as I discovered that Tom was a quiet person, full of trail knowledge and a great listener. I even related to his quirky sense of humor. I will always remember my first meeting with Tom. 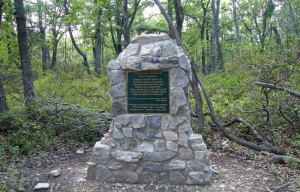 This monument dedicated to Dr. Thomas Thwaites, the ‘Father of the Mid State Trail ‘, is erected near the site where the first trail blazing occurred. Image courtesy of PAHikes.com

My favorite memory of Tom happened in the summer of 2009. This was the 40th anniversary of the Mid State Trail, and I was working on writing a series of articles about the history of the MST. Tom had penned a few pages regarding its history, and I had some additional questions for him after reading them over.

The Elk Creek Café & Aleworks had brewed a special beer for the MST 40th anniversary, the Mid State Trail Nut Brown Ale, so I grabbed a growler, stopped by Tom’s place to pick him up, and we headed into the woods. We set a couple of chairs on the Mid State Trail proper, up on Little Flat, near the spot where Tom started the trail 40 years ago. He and I sat for almost two hours talking about the Mid State Trail and its evolution over the years and enjoying a couple pints of craft beer made in honor of the trail. I was sad when the beer ran out and Tom’s voice started to fade, indicating that this time together was nearing an end. To me, that was an awesome day, spending it with Tom, on the trail, talking about hiking.

The final memory of Tom relates to his eyebrows. I remember reading somewhere that Tom’s eyebrows were compared to some wild and crazy caterpillars perched above the rim of his glasses. As I get older, I find that my eyebrows are taking on a similar appearance. I guess it is something other than hiking that I have in common with Tom. 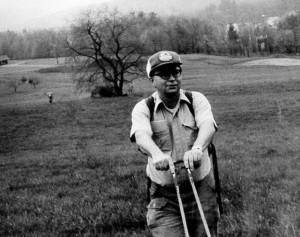 3. Gary Thornbloom
I recall skiing with Tom on the entrance trail to Rock Run. Tom stopped and told me to go on ahead. I told him to continue leading and we would do the hill in front of us at whatever pace worked for him. We continued, and at the next short break Tom commented that he had asked the doctor to juice up his pace maker a bit. He figured that if they would have done that then he could have ascended hills at a quicker pace. 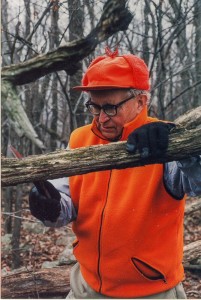 Tom and his trusty folding saw while on a Sierra Club Moshannon Group outing, late 2003. Image courtesy of Gary Thornbloom.

4. John Eastlake
I first met Tom on the Black Forest Trail 43 years ago. What a Legacy he gave us. No was not in his vocabulary. 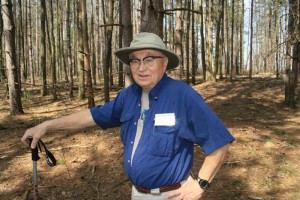 Tom during a KTA weekend at Wellsboro. Photo courtesy of John Eastlake.

5. Jean Aron
Tom Thwaite, TTT and T-Cubed to some, was a good friend and mentor. I have known him since about 1978. I can barely recall a time when I was not inspired by Tom’s example in hiking, leading, building trails, appreciating the outdoors, and writing. Following in his footsteps — often literally — was the greatest privilege of my life.

The first picture I have is from 1981 and shows Tom cooking hot dogs (tube steaks) after a trail clear of Little Flat. That became my section to maintain for about 20 years thereafter.  Tom always had willing trail work help from his students in PSOC, Penn State Outing Club. His secret to scoring volunteers was to feed them afterwards. It was either tube steaks grilled outdoors, or, on colder days, he would have a big pot of chili back at his house.

The next image I have is from November 1981 and shows a “Forest Gnome” :Tom in a red felt hat, which he always wore in the early days while hiking and exploring. 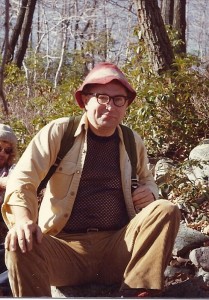 My next image is from 1982 and shows Tom clearing a blowdown with a folding saw, which he usually carried in his pack. It often came in handy, and we all are beneficiaries of his practice to “never give a blowdown an even break”. 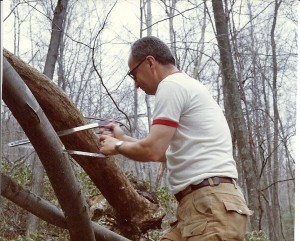 The next image is also from 1982 and shows Thwaites on his “Tom-designed” foot bridge. Built by splitting a very large log down the middle and putting up a single handrail between the halves, the “mono-rail” was supposed to help separate the “enormous volume of two-way traffic”, which would surely come to hike on his wonderful new trail. OK, that may have just been some of Tom’s tongue-in-cheek, wry humor.  Unfortunately, this bridge lasted only a few years since it was pressurized only by nature’s elements. Later Alpha versions, made of pressurized lumber, may still be found on some of Tom’s trails. 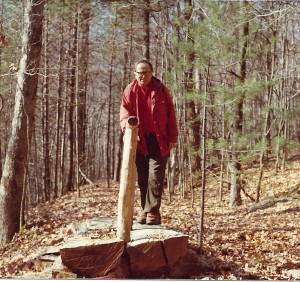 My final image is from March of 1983 and shows Tom sharpening tools and fixing a weed cutter in the PSOC Trap Room on campus.  He spent a lot of time there making routed signs for the trail, caring for the hand tools used to clear trails, and hobknobbing with students who came to borrow backpacks and sleeping bags for some of the PSOC trips. As Faculty Advisor for Hiking, he was one of the busiest of the 4 or 5 PSOC advisors. 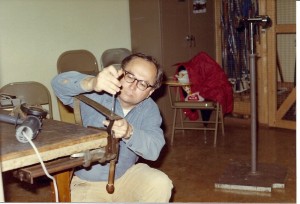