In mid August, my family and I went to Arizona to visit my grandmother. The last time I was there I was fifteen years old and had the flu, so everything seemed relatively new to me this trip. To be honest, it was a welcome change after the cold, wet summer we had in Pennsylvania. August in Arizona is the rainy season, but it still got up to about 100 degrees every day and there was no humidity at all. It rained just about every evening, but it was a decisive, hard rain (during which the sun still shone) that ended quickly and dried almost immediately. Most of our time there we spent with the family and there wasn’t an excess of time in which to survey the local scenery, but we did get out to Sabino Canyon one morning for a short hike.

Sabino Canyon is a gorgeous natural area in the foothills of the Santa Catalina mountains in Tucson, Arizona and a popular destination for tourists and locals alike. Even at 7 am, we saw plenty of people out for hikes and jogs. No cars are allowed in the park area, but trams do run along some of the trails to give tours. The trails are easy to follow, and some include sections of paved roads. There are several bridges that run over Sabino Creek, which runs for most of the year despite the extreme heat.

When we arrived at the parking lot at quarter to 7, the sun was up and it was already probably 85 degrees, and the air was still heavy from night. We started out on the Nature Trail, a very small introductory walk that leads to many other trail heads in the park. We opted for one of the shorter hikes, which had signs directing us to the Sabino Dam. 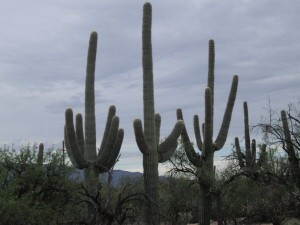 Cacti were everywhere. We saw mainly giant saguaros, teddy bear cholla, and prickly pear. We even saw the skeletons of some dead cacti, which are much more interesting than other dead plant life. Apparently cactus skeletons are highly desirable, and it is illegal to remove them from the desert without land owner permission. Giant saguaros leave behind a very structural, geometric skeleton that was used by Native Americans to build parts of houses and tools. Teddy bear cholla have a very different skeleton. It looks a little like driftwood and is used by artists to create unique forms and walking sticks. This cactus looks immensely cuddly from a distance, with soft, pillowy bundles. However, if touched, the bundles of spines easily detach and give the illusion of having jumped right off the plant and into your skin. Years ago I had the misfortune of touching one, and they are very painful and hard to get rid of. Smarter this time around, we stayed clear of the cholla for the duration of the hike. 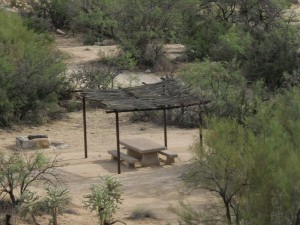 The trail took us up some small hills and provided a beautiful view of the park below. Directly below us was a paved road that lead to a picnic area, but past that was a breathtaking view of the Catalinas. As we descended on the narrow path, the mountains towered over us. The highest point in these mountains is Mt Lemmon, with an elevation of 9,159 ft. For comparison, Mt Nittany is 2,077 ft in elevation.

The trail leveled out at the bottom, and we saw a few horse posts as the area opened up along with a faucet set into a boulder. It looked like a phenomenal place to rest if you’d just been on a long hike. At the end of this area was our destination: the Sabino Dam.

Despite the rain over the past several days, the dam was almost completely dry. Built in 1937, the dam was the result of a plan by the WPA to create an area suitable for fishing and boating. The funding never came through for that project, so the smaller dam was built instead and allowed for some swimming and other aquatic endeavors. The dam is still incredibly popular, even though the pond dried up and filled with vegetation years ago. 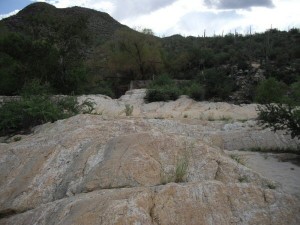 After a few minutes exploring the area, we began our hike back to the parking lot. This time we walked back on the parallel road for a different view. On our way, we hoped to see some wildlife. Sabino Canyon is home to an abundance of animals, including deer, rattlesnakes, tarantulas, and herds of javelina. Unfortunately, we only saw lizards. Many of the desert animals are crepuscular so as to avoid the heat of the sun, and we were out too late to see them.

When we arrived back at the lot, we paid a short visit to the park center where I bought prickly pear candy, which smells awful but tastes pretty good. We made plans to come back later that day to do more hiking, but unfortunately we never got the chance.

Next time I am there, I plan to take a longer hike on the Seven Falls trail, which leads over Sabino Creek and through Bear Canyon to several pools of water to wade in. It was a beautiful park and should definitely be visited by anyone interested in hiking in the desert. The terrain was fairly mild, and I did just fine in my running shoes, but I definitely recommend high socks to protect against cactus spines, as well as plenty of sunscreen, a hat, and sunglasses.  Of course, be sure to check out the great selection of hiking gear at Appalachian Outdoors before you go!