When one thinks of New Jersey, what typically comes to mind? Crowded urban settings? The turnpike? Maybe even the sandy beaches of the Jersey Shore? But there is more than meets the eye with New Jersey; a northern part of the state where you can find Wharton State Forest, (or as it’s known by the locals: Pine Barrens).

Here in the Pine Barrens you will find the BATONA Trail, a 50 mile hiking trail that traverses Wharton State Forest, Franklin Parker Reserve, Bass River State Forest, and Brendan T. Byrne State Forest. The name, BATONA, is actually an acronym for Back To Nature. It was made in the 1920s when Philadelphians escaped the concrete jungle of the city to do some hiking. In the Pine Barrens one would typically find — you guessed it! — lots of pine trees. Almost the entire trail had pine trees along the side. Because the trail is so close to the ocean, the salt content in the air prevents the trees from growing very tall. The biggest ones were about 20 feet high.

Recently, I did the entire trail in just 35 hours with members of the Penn State Outing Club. The goal was to finish in 48 hours, but we crushed that.

On the first night we arrived in our campsite around 11pm after we had dropped off a vehicle at the finish line. It was a cold night. A real cold night. It was below freezing when we got there, and I awoke with frost on the outside of my sleeping bag and my hammock. Thankfully, I had my Thermarest Z-Lite sleeping pad that added some much needed insulation to my hammock setup.

After waking up to oatmeal and frozen pop tarts, we made our way to the trail head. We actually started just before 10, which was late considering we were planning on doing 25 miles that day. 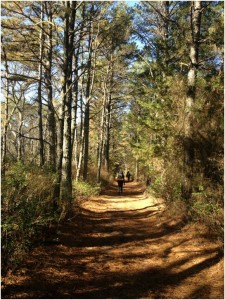 We warmed up quickly as we hiked thanks to the flat and sandy trail. Since this area is so low to the sea, swamps are a common sight to see. You can expect to find short boardwalks to traverse the marshy flatland, making this a relatively easy trail to hike. 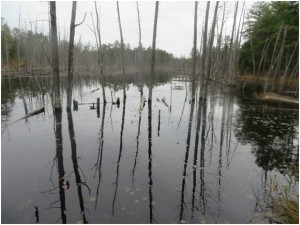 Along the trail, you’ll find some beautiful ponds, some of which have beaver dams. You are going to cross more than a few roads along the trail so be on the lookout for the trailblazes. There are many intersecting trails that make it easy to lose track of where you are. 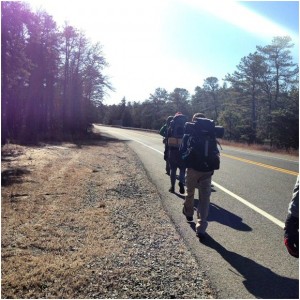 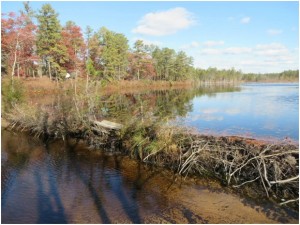 We walked. A lot. I don’t recommend doing something crazy like what we did, doing 50 miles in less than 48 hours, but it is possible! Having good company when doing a hike like this makes the trek a little less strenuous.

After hiking for many miles, we arrived at this little village called Batsto, which is now a tourist attraction. It was getting dark, and we were pretty tired already. 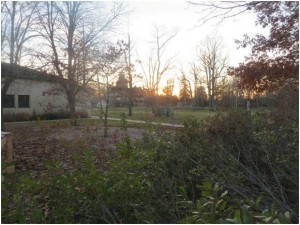 Once we refilled our water bottles, a local asked us where we were staying. We told him the Lower Forge which isthe halfway mark of the trail and at the time was 7 miles away. He responded with a sarcastic “You guys better get moving.” Thanks, man. With our legs tired, but our spirits determined, we hit the trail.

Did it get dark before we finished? Yes. Do I recommend hiking in the dark? No, I do not. This part of the trail was particularly agonizing because it was extremely difficult to see the trailblazes in the dark, even when all of us had headlamps. After getting lost a couple times, we finally arrived at our campsite around 9 PM. It was getting cold and we were hungry. We wolfed down large quantities of minute rice with taco seasoning, cheddar cheese, and pepperoni. Certainly not 4-star cuisine, but it was food nonetheless. It filled our bellies and allowed us to sleep.

The next day we woke up earlier, ate our oatmeal with crushed frozen pop tarts, and hit the trail. The morning was not quite as cold as the previous night, and we were able to get moving earlier. A couple miles later we arrived at the point where we had to ascend the highest point of the trail!

In New Jersey they consider high points to be 200 feet above sea level. This was called Apple Pie Hill, and atop Apple Pie Hill stood a fire tower that we climbed. The camera could not get a good shot, but we could see Atlantic City from atop the tower. Take my word for it, the view was great. On clear days it is possible to see Philadelphia. It was cool to see the landscape of New Jersey without civilization nearby. 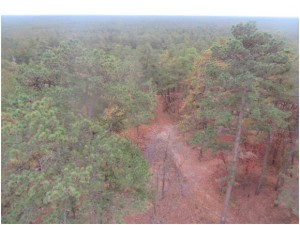 We kept walking until it got dark, which was around 6 PM. It started raining, and we were exhausted, but there was still more to go.

The last 10 miles were probably the hardest 10 miles I have ever hiked just because we were so eager to get to the finish line where a car was there to take us home.

Finishing the hike felt incredibly rewarding. Looking back it was one of the most amazing hiking experiences in my life, and it was all in New Jersey. This is a good trail to do if you are training to do a serious through-hike such was the Long Trail in Vermont, the Mid State Trail in Pennsylvania, or even the Appalachian Trail. It will test your endurance and legs, but will also give you a beautiful scenery and a good experience in the outdoors.