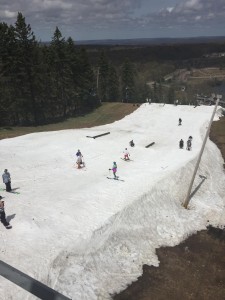 It’s 70 degrees, bright, and sunny. Normally you’d think of doing activities such as sailing, mountain biking, or hiking on days like this, but not the young intrepid skiers of Pennsylvania! Thanks to the operations at Big Boulder, skiing was open for their May Day event on May 9, 2015. Fun was had by all on a strip of snow running down the center of their main park slope. Though it wasn’t near the amount of snow we’ve seen in the winter, there were still some handrails, mailboxes, and a few medium sized jumps to enjoy. While today may not be the tastiest cup of tea for traditional skiers seeking steep technical terrain, it did offer a different look at how skiing is done during summer conditions. For example, there simply was not enough snow to cover the area between the end of the slope and the chair lift. The skiers and riders had to unstrap themselves from their ski or snowboard and walk up to the lift in order to ride it. Because of this, they ran the chair at half its normal speed. This made for pleasant conversation in the lift line because it ran so slow.

In essence, the skiing was slowed down due to the laissez-faire attitude of the skiers and riders on this unique day, but also because of the quality of the snow. It was exactly how you would expect it to be, which was like skiing on mashed potatoes. Turning was easy because you could really dig your edges into the soft snow in order to perform a trick. We could talk about the conditions all day, but there was a different energy in the air. Even though it was during the month of May and conditions were subpar, it showed the dedication that the young, hungry skiers have to get every ounce of ski time out of the year. The sport is definitely moving in the right direction with a young crowd showing the commitment they have to skiing and snowboarding.