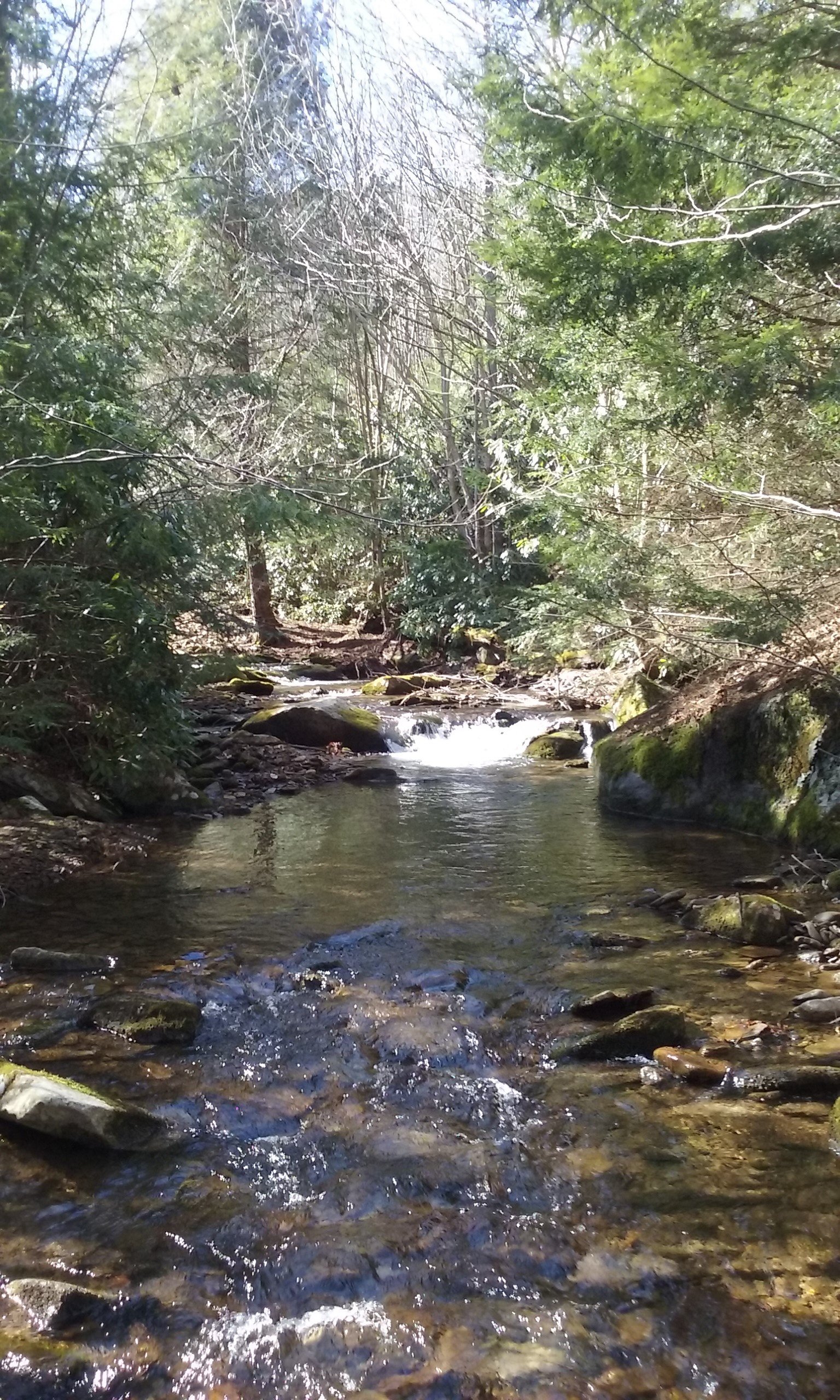 “The objective of wild areas is to set aside certain areas of land where development or disturbance of permanent nature will be prohibited, thereby preserving the wild character of the area. In Pennsylvania’s state forest system, certain areas that retain an undeveloped, wild character are designated as Wild Areas to assure that this primitive character is perpetuated. A wild area is defined as an extensive area which the general public will be permitted to see, use and enjoy for such activities as hiking, hunting, fishing, and the pursuit of peace and solitude. Development of a permanent nature will not be permitted so as to retain the undeveloped character of the area. Because of the restrictions imposed on wild areas, careful consideration must be given to alternative uses before additional areas are so designated.” –DCNR BOF Guidelines and Definitions for Natural Areas and Wild Ares, June 2016

There are nineteen designated Wild Areas (W.A.) in Pennsylvania. The Chuck Keiper Trail (CKT) in Sproul State Forest leads through two of these areas: Russell P. Letterman W.A. (formerly Fish Dam W.A.) and Burns Runs W.A. While the initial route of the CKT lead through many miles of the Russell P. Letterman W.A., a tornado event in 1985 severely restricted access to this area. Trail legend Tom Thwaites and other founding members of the Keystone Trails Association [hike-kta.org] assessed this area after the tornado and decided to relocate the CKT because the damage to the footpath was too great to overcome. Now, the Chuck Keiper Trail explores approximately four miles of Russell P. Letterman W.A. My good friend Eriks and I decided to re-explore this remote area of Central Pennsylvania in an effort to find the original CKT route.

First, we used the free CKT maps, last produced in 2015 by PA DCNR,that show a red-blazed trail leading from Route 144 through Dennison Fork and Fish Dam Run (these trails have not existed since 1985). We also carried the CKT Guidebook,, which shows the Fish Dam Vista Parking Area and the current CKT route. 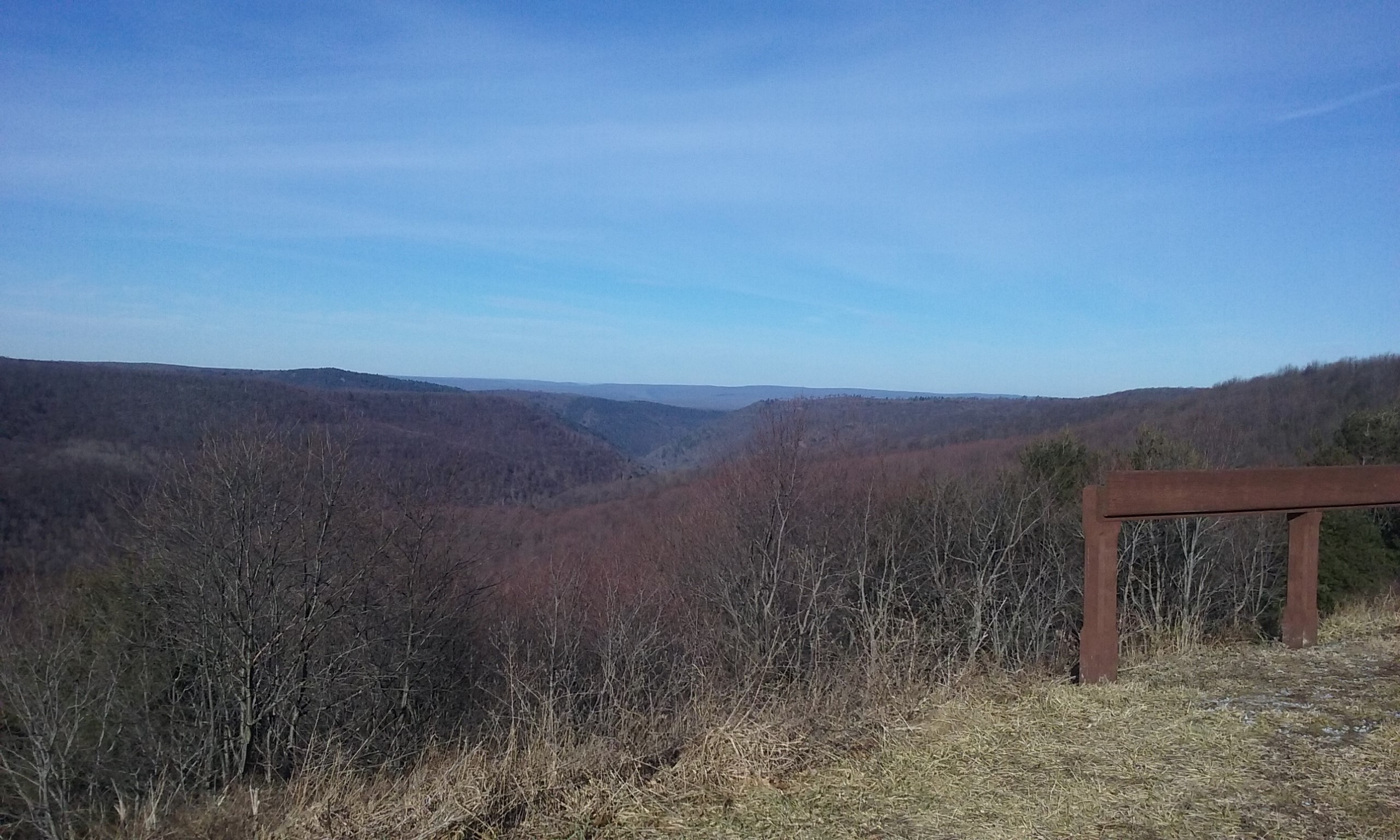 Initially, we found a red blaze on a tree near route 144. After a few more minutes of bushwhacking, we found a second red blaze (on a piece of bark on the forest floor). Several minutes later, we decided to simply bushwhack downhill until we found the headwaters of Dennison Fork. By simply, I mean to say that we climbed over and ducked under the rotted remains of old trees that fell thirty years ago during this tornado event. We were also forced to trip, stumble, and weave our way through younger underbrush that has essentially made this area impassible during all other seasons of the year.

After a steep and dangerous descent, we found the upper regions of Dennison Fork. Now, the path was obvious and wet, although, not easy to follow. 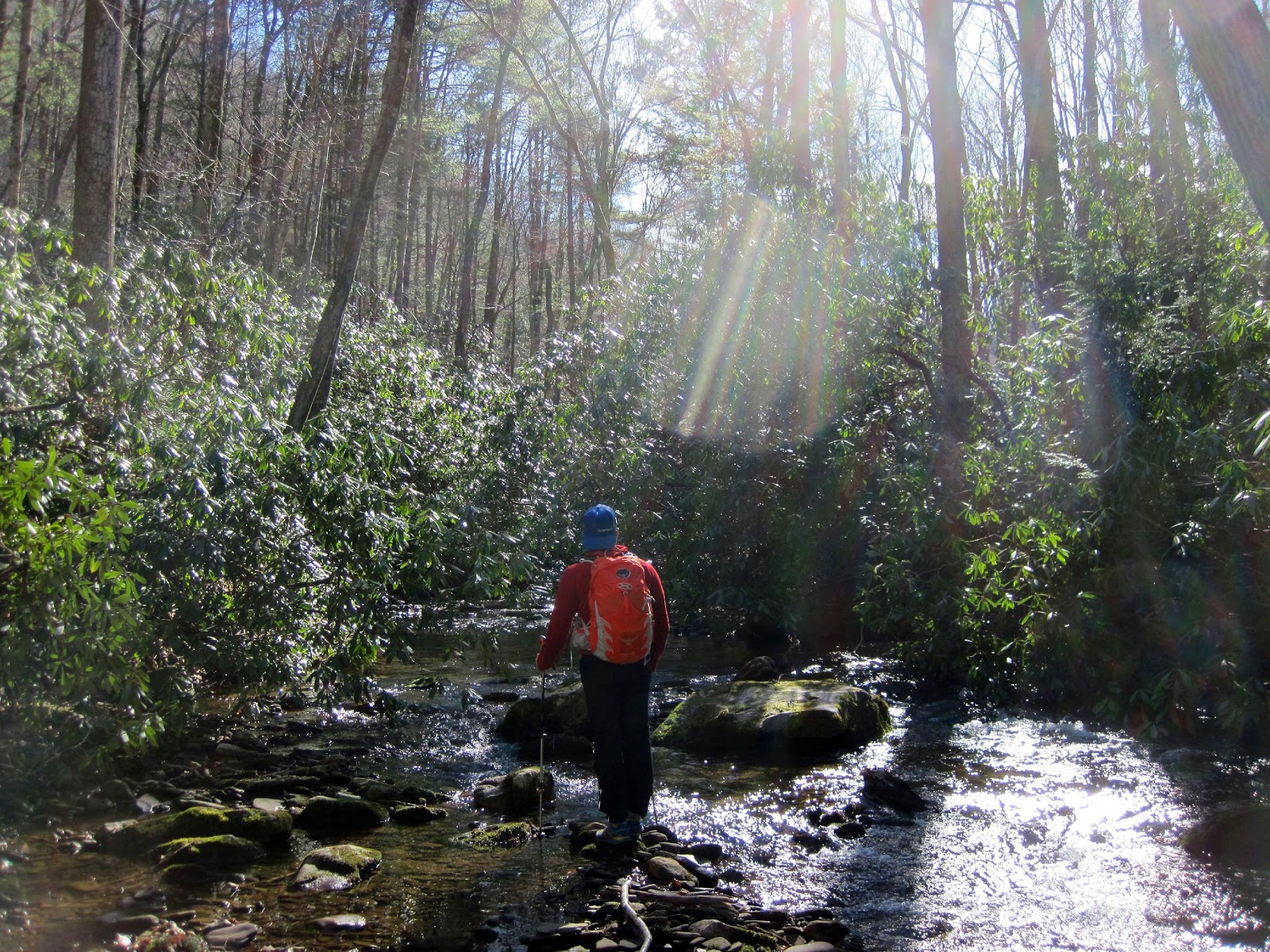 Luckily, Eriks soon found an old road/path (possibly the original CKT route?) on the north side of Dennison Fork. This old road was blazed with white circles, and although it hadn’t been visited in years, it was much easier to follow than the stream itself. We followed this path on and off for miles. The whole time, we wondered when the last humans had visited this area. Eventually, we did find some blue flags that someone had left behind, which was now trash (the flags are now gone). Along the way, we found trees that were obviously older than the oldest living humans on the planet today (for reference, I stand 5 feet 6 inches tall):

Eventually, we reached the confluence of Fish Dam Run and Dennison Fork. Again, DCNR maps from 2015 show red blazed trails on both forks of this stream. In reality, there are no red blazes within miles. We did find a beautiful and pristine area, which appeared seemingly untouched for many years. We stopped to admire the area and refuel before our ascent upstream towards the current route of the CKT.

The ascent along Fish Dam Run was more difficult to follow than our descent down Dennison Fork, but we did manage to follow something that seemed like a path from years past. Soon enough, we crossed a side stream (Proctor Hollow) to the north, and later, another un-named hollow to the south. Finally, we spotted orange blazes, indicating the current CKT route. From here, our day became less stressful–now we were following the orange blazes of one of the most remote trails in Pennsylvania…rather than bushwhacking through an untouched Wild Area in Central Pennsylvania…