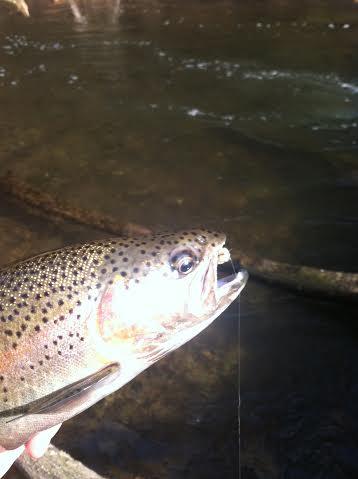 Although the rain has been anything but consistent and I’ve forewent a jacket for the past few days, I’m told that fall is here. Last week, we took a look at how to tie one of my favorite fall streamers for large trout, but this time around, I’d like to up the ante of huge salmonoids and enter the realm of steelhead fishing. After all, we are just beginning the season to pursue these goliaths.

Being in Central Pennsylvania, we have an overwhelming amount of trout streams, however large lake-run trout and some of the other salmonoids that our Great Lakes fisheries offer are naturally void. Though this is slightly inconvenient for the avid steelhead angler, it could be worse. I say this as we aren’t painfully far from both Lake Erie’s tributaries or the tributaries found seeping out of Lake Ontario. Whether you want to drive north or west, you can count on either of these areas to get you into fish.

Chasing steel on the fly since the ripe ol’ age of 8, I think I can say that I’ve done my fair share of Steelhead fishing around our Great Lakes. In that time, I’ve found that these streams often attract some of the most savage forms of human beings I’ve seen since the last Penn State riot, but also that it isn’t too difficult to hook into a fish that will drag you downstream forty yards, upstream another thirty or so, and then make several aerial leaps just before breaking you off right at your net; in other words, these fish can serve you a hot cup of adrenaline that would make Evil Knievel uneasy.

In the years that I’ve spent fishing for these beasts, I’ve found a few things that have made my life easier and my fishing more successful. I’d like to share these with you all, especially those of us who may be driving ten or fifteen hours to fish for these fish (I’ve been there, and there’s nothing worse than getting skunked after a drive that long).

First things first, I’d say that I’ve encountered about three types of Steelhead anlgers. You’ve got your purists, those of us who are willing to walk miles and miles to escape crowds and find that lonely pod of Steel. Then, you’ve got the leisure anglers, you know, the guy who brings a lawn chair and spends most of the day pitching salmon eggs in the same hole that he set himself up in at 6:00 AM. And after these guys, you get what I like to call the “savages.” This is the crowd of people who chuck more lead than most fly shops have in stock, will wade right into the middle of the best hole, and then proceed to start lifting fish one-by-one until their stringer is full. The good thing about these three groups of anglers is that really only one of them is willing to walk more than a few miles in search of fish.

All of this leads me to my first point of advice in the world of Steel, and that is simply to walk. Depending on where I am, I can usually expect to walk a few miles just to get to a hole I’d like to fish. I do this for a number of reasons. Simply enough, the first is that I enjoy solitude whenever I’m fishing. Second, I like to escape the circus of anglers that seem to congregate in the most accessible mile or two of stream. And third, the more you walk, the less chance you have of finding fish that have seen every fly and bait in the shop. Sure, the fish closer to the mouth of the lake may be fresher, but whenever they have a hundred flashy spoons and sixty-seven different egg patterns thrown their way, it isn’t uncommon for them to get a bit of lockjaw early on. The fish on the move, however, have been in the stream longer and have been expending more of their energy swimming upstream, which should, in theory, make them hungry and more willing to eat. Another point to make, whenever you’re walking miles in search of hungry fish is that you, too, will get hungry, so plan ahead and make sure that you have enough food and water to get you through the day.

Now that you’ve located your fish, what’s the next step? Simple, choose the right fly. I’ve found that Steelhead aren’t always the most picky of fish. I wouldn’t be caught dead without at least three or four dozen egg patterns in a large variety—it’s true, these fish really do love eggs. However, eggs aren’t the only flies I like to use. One of the best ways to up the adrenaline of a day of Steelie fishing is by hucking large streamers at them. The best time to fish streamers is either before winter has set in or after. The reason for this is that fish are less active whenever it’s freezing out, thus, they are less prone to whack a large Egg Sucking Leech from three feet away. If streamers and eggs just aren’t your thing, you can take a more original approach and toss nymphs all day. I really like to fish Stonefly nymphs, and I’ve had great days fishing tandem rigs consisting of bright egg flies and dull nymph patterns.

The last bit of advice that I’ll leave you all with is this: whenever you find a pod of fish, don’t leave the hole to seek more fish. Say it’s now around 1:00 PM, you’ve walked three miles and found a hole that’s void of other angler pressure, and it has ten or fifteen fish in it, is there really any reason to scout out more fish? I’d say no. In my experience, Steelhead are notorious for shutting off and turning back on twenty minutes later. Meaning, you may have five hits in ten minutes and then nothing for hours. That’s just the way it goes. In times like this, it’s best to let your fish (and yourself) take a break. This allows you to recompose and the fish to calm down a bit before you drift your fly by them once again.

Of course, the tips that I provided are just things that have worked for me. There’s no set-system to catching Steelhead, and if there’s one thing that I’ve really learned, it’s that Steelhead are the absolute furthest thing from a sure thing. It’s important to make the most out of your trip, even if that means just wandering around in search of the perfect run for next month’s trip.

And please, dress warm. Steelhead fishing mostly takes part in the coldest months of the year, so if you’re new to the sport, have a look at a post I wrote last year about gearing up for cold-weather fishing. Really, the only thing worse than driving ten hours and getting skunked, is driving ten hours and skunking yourself because you weren’t prepared enough to stand in a freezing stream for hours on end.