As the summer season begins to really get underway, I find it an appropriate time to dive into one of the trickiest, yet rewarding mayflies of the season. This bug is the tiny Trico Mayfly (Tricorythodes). Aside from being one of the smallest mayflies found in North America, the Tricos also have a rather unorthodox way of hatching, which draws most anglers towards the spinner fall rather than the actual hatch. The male Tricos are dark in color and hatch throughout the course of the night and then await the emergence of their female companion the following morning. Female Tricos take an olive hue and make their appearance early in the morning. In the beginning and middle of the summer, around July, you’ll usually find them hatching earlier in the mornings in preparation to mate. This is right around the time that the sun begins to rear its head. As the season progresses, between the middle of August and through the end of October, the female Tricos hatch a little later and push the spinner fall back a few hours; generously giving the anglers a little more time to sleep in. Once the females are present the spinner fall will begin to occur, and this is when the fishing tends to heat up.

Yes, you can fish both the emergence of the male and females with success; however, I prefer to spend my time focusing on the spinner fall. Gathering in humungous swarms, the Tricos will mate in the morning. And like the emergence of the female duns, as the season pushes forward, you’ll see the spinner fall happening later. In the heat of summer, it isn’t uncommon to find a swarm of mating Tricos on the water by 6:00 am and later in the season, towards October, as late as 1:00 pm. The general rule is that on those really hot, muggy, and bright summer days, the Tricos will start to mate early and wrap up a lot quicker than those chilly, grey days.

Like most mayflies, the Tricos will gather high in the air and as they undergo the mating process fall closer and closer to the water until every fly is found spent on the surface. Fortunately, Tricos operate on a “strength in numbers” lifestyle and assemble themselves into very large and dense clouds. The trout, on the other hand, do sort of the same thing. Due to the small size of the Tricos, the trout will feed voraciously on fly after fly until there are no more left. This means that with the right pattern and technique, you can fool quite a few fish during this fall. Most spinner falls bring fish to the surface during their entire course, with about forty-five minutes of serious feeding. 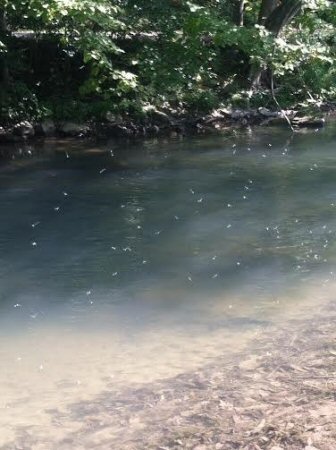 A moderate size swarm of Tricos.

For the angler trying to fish this fall, you should prepare to be on the water at least a half-hour prior to when you believe the process will begin. This gives you enough time to choose your favorite hole, watch how the trout move into their feeding stations, and then recognize the feeding pattern of each fish. When fishing a Trico fall, I generally like to use flies between the sizes of 20 and 28 with a size 24 being my most commonly used fly. In terms of tippet and leader, I do prefer to have a solid length to the two, maybe eight or nine feet long. However, I don’t commonly use tippet below 6x and more frequently I use 5x whenever hook size allows. This saves the fish from any stress that may be caused from a long fight; especially considering the midday summer heat is probably already causing them a good deal of stress. When choosing an appropriate fly, I fish a fairly standard, dark spinner to represent the males. Though, on some occasions the trout will key in on the females, which have a white body and dark thorax. The best way to figure out which is the dominant food on any given day is to simply watch the behavior of the trout.

Fishing the Trico fall may seem like a difficult process to engage yourself in, however, after a few shots at it and enough early morning wakeups, you’ll quickly find that you can have as much success with this bug as you can with any other hatch or spinner fall. Not only are the Tricos one of my favorite hatches of the season, but I also find them to have a certain elegance to their flight that is just plain enjoyable to watch. Luckily, Pennsylvania, and most of the east coast, has a large distribution of these flies and they can be found on quite a few different streams. Being that not every angler is an early bird per se, it could be possible to gloss right over this magnificent spinner fall without even knowing that it occurs on your favorite piece of water. That being said, we aren’t that far from some great Trico fishing, so get out there and take advantage of the upcoming swarms of bugs and good weather.