Editor’s note: If you’re new to the Philtrons’ story of bike touring from Alaska to Argentina, check these links out: 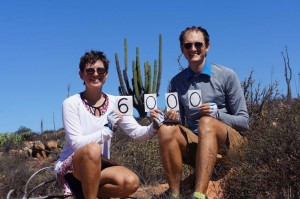 It’s been about two months since we crossed the border into Mexico, and we’ve ridden over 2,300 miles in this fantastically varied and welcoming country. Before we started this portion of our trip we were warned by a great many well-meaning folks of myriad dangers, none of which have materialized. We want to write about our experience here so far to encourage other folks to get to know our southern neighbors, either through our blog or through adventures of their own.

Where have we been?

We crossed the border in the small town of Tecate, which is about 30 miles east of both San Diego and Tijuana. The border crossing in Tijuana may be the busiest border in the world, but we chose the calmer route, and we are glad we did. Getting our 180 day tourist visa was a breeze, and there were easily-available hotels mere blocks from the border station.

From here we headed south for over 1,000 miles along the Baja peninsula. This was a fantastic stretch of desert vistas, cacti, small towns, and perfect beaches. The Baja is safe, as many expats and vacationing Canadian snowbirds will tell you. Just watch out for the sting rays which lurk underneath the waves on apparently perfect beaches. Jason got stung by one, but the treatment of submersion in near-scalding water worked and the poison was neutralized. 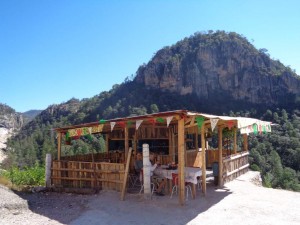 At the southern end of the Baja we took a cargo and passenger ferry to the resort town of Mazatlan. We were greeted by humidity and jungles. From here we headed straight for the mountains into the states of Durango, Zacatecas, and Aguascalientes. The heat dropped as we gained altitude, and soon there was frost on the tent at night again. We began staying in hotels because they were so fantastically cheap. It is hard to turn down a bed and a shower when they cost less than $10 per person! 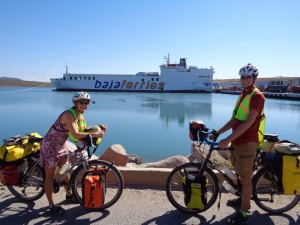 Finally, we left the high western country and chose to take a detour through a biosphere reserve through some of Mexico’s eastern mountains. This mountain reserve is home to some 33% of Mexico’s bird species and hosts some incredibly varied ecosystems, not to mention small, neat, mountain towns with lively markets and central plazas. We climbed through these mountains twice before heading back into the highlands around Mexico City. On our way south we visited a number of ancient ruins and are finally in southern Mexico, about to descend to lower altitudes and true jungle. 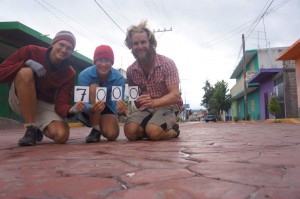 Things we love about Mexico

* Car culture (or lack thereof). Let’s be honest: car culture in the US can cause some problems for touring cyclists. Even in bike-friendly areas we get honked at in an unfriendly way, yelled at, and every now and again a car fails to give us enough space, causing us to nearly jump out of our skin. In Mexico, however, far fewer people have cars and more people bike for everyday transportation. The drivers are aware of this and are also ever alert for the chaos of Mexican streets. We are almost always given more space than we need, and in a single day we get more honks of encouragement and thumbs-ups through the windows than we did in most weeks in the US or Canada. For this reason we feel much safer on Mexican streets and highways than we did north of the border. 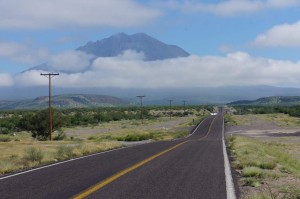 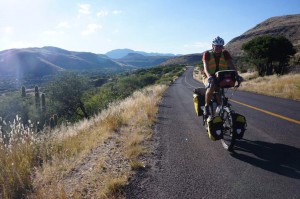 * Lack of suburbs. The cities and towns here are compact. We can enter or leave a large city of a million people in an hour or two, which is very different from entering or leaving a large US city. 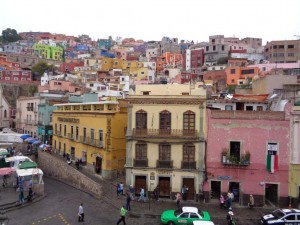 * Varied terrain, ecosystems, and peoples. We have ridden through desert, tropical jungle, high altitude valleys, pine forests, ranch land, farmland… and we’re only halfway through! In four days we rode from sea level to over 9,000′ of elevation, and we’ll do it again soon. In all of these places there are towns and cities with more antiquity, history, and tradition than we experienced in the US. For example, the city of Durango celebrated its 450th anniversary last year! The little towns we often stay in are far off the tourist track, and we love seeing the tiny plazas and churches that come alive on market day with folks selling everything from prickly pear cactus fruit and tacos cooked on the spot to ancient cassette tapes and beat up screwdrivers. 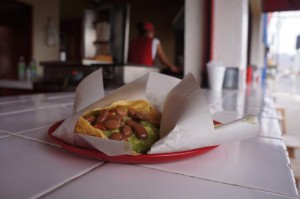 * The colonial cities. The city centers here are stunning beyond what we expected. They are nearly always centered around a large and intricate cathedral with a plaza in front.  Other plazas nearby are usually ringed with shops, cafes, restaurants, and cantinas. The pedestrian streets are lively into the night with street vendors that make roasted corn, tacos, gorditas, popcorn, and other snacks. These vendors also tend to operate from three-wheeled cargo tricycles that have been adapted to whatever they specialize in. We are particularly fond of the roasted corn and fresh fruit stands.

* The price. It is so cheap to travel well by bicycle here. In a typical day we spend $4 for large amounts of fruits, vegetables, and grains from a central market. If we eat out at a food stand we might spend $6-$8 on a satisfying lunch for two. To stay in a modest hotel we usually spend between $12 and $20, even in the heart of a large city! This leaves us somewhere between $8 and $18 under budget most days.

Challenges we’ve had while traveling in Mexico.

* Finding water that is safe to drink. We were often warned: don’t drink the water! This is one piece of advice that we always follow. In some towns it is easy because we can find a water-purifying station that will fill our bottles for very little. In other places it is more challenging because we must buy water in large bottles, empty them into our water bags, and then dispose of the bottle. This feels wasteful, but has been unavoidable in many areas. 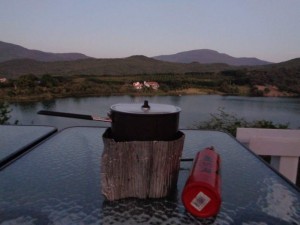 * Spanish. If you want to get the most out of Mexico, you need to have some functional Spanish skills. Luckily for us, Daisy has near fluency from being an exchange student in Spain, and Jason’s skills are coming along. Spanish helps us to make meaningful connections with the locals and to share our stories. Mexican Spanish is very different from Spain Spanish though, and we are having to re-learn some vocabulary, particularly slang.

* Safety Precautions. We acknowledge that there are some aspects to travel in Mexico that are not as safe as they were in the more northern countries. In particular, we are careful about where we end up each night. It is important to us that we are either in a safe camping area or that we are in a safe hotel before night falls. This means that we have to plan a bit more about our route and how far we need to travel each day to make sure we aren’t caught in the open when night falls. Sometimes we have to do shorter days to be sure, so our progress is a bit slower than it was in the US and Canada. 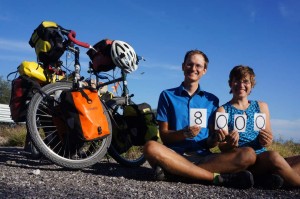 * Dogs. We love dogs, but they present some unique challenges here in Mexico. There is almost no spaying or neutering here, so the stray dog population is unchecked. Many dogs want to chase us when we ride by, or steal our food if we leave it unattended. We also love to see all the crazy mixes and puppies, but it breaks our hearts to know that many of them are uncared for. 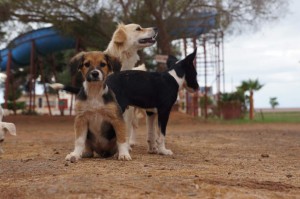 Highlights from our time in particular.

* The desert in bloom with other cyclists. We had the incredible good fortune to ride through a blooming desert for many days. The scenery would have been monotonous under other circumstances, but for us it was a riot of color from the plants, birds, and thousands of butterflies. We also were lucky to meet and camp with many other long distance touring cyclists during this time. Some of them had also started their trips in Alaska, and others had started in Canada. Spending time with them enriched our experience and provided us with many, many hours of discussion and entertainment. 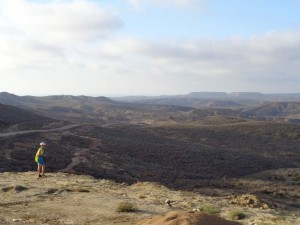 * Snorkeling in La Paz. Because we were traveling in a group of six cyclists we were able to organize a one-day snorkeling tour with local guides in the area around La Paz in the south of the Baja. This was an unforgettable day in which we snorkeled with schools of tropical fish, friendly and playful sea lions, and even whale sharks. 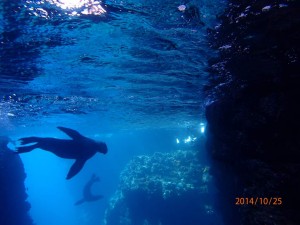 * The toll road to Durango. At the last minute we changed our route to ride this road into the high mountains of the Mexican mainland. The road was only completed a year ago and passes through 63 tunnels and over 100 bridges as it climbs up and up and up. We rode over the highest suspension bridge in North America and spent three days gasping at the scenery (and the thin air at 9,000′!).

* Durango. Our reward for our long climb into the mountains was this charming colonial city where we spent two days and celebrated the Mexican holiday: Day of the Dead. We visited an Old West Hollywood film set that is now a Mexican theme park, wandered through a mining museum that had been turned into a tunnel of terror for Day of the Dead, and spent our evenings on the pedestrian streets listening to live music and eating from street vendors. After our two days here it was hard to leave! This city is absolutely on our list of places to return to. 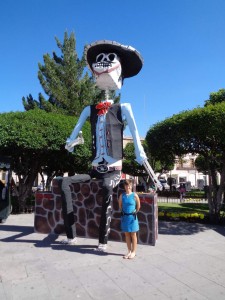 * Guanajuato. This is another city that captured our imaginations. We ended up staying here for two full days, which was much more than we had planned. It is a city built into a steep ravine that is full of colorful houses, twisting alleys, tiny plazas, art, and a university. The students (nearly 20,000 of them) helped to make this town feel alive and exciting, even in the rain. We spent two days wandering the streets (and getting lost), eating at the food stalls in the central market, and generally enjoying the atmosphere.

* The mountains. We always love the mountains, but here in Mexico we have loved them even more. The roads may be steeper, and the pavement sometimes in worse conditions, but the sheer size and forbidding nature of these mountains rival anything we’ve seen up north. In addition, we love the tiny towns that cling to the sheer sides of the mountains here. They make it easy to find safe places to sleep, water to drink, and food to eat. We continue to plan our route around hitting more and more mountains. 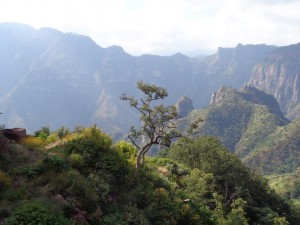 * Getting ‘adopted’ by local families. Occasionally, in very small towns, a family will take a particular interest in our trip and invite us into their home to share conversation and coffee. In one particular mountain town we attended the village festival for their patron saint. Not only did we get fed a delicious meal, but we also got to learn their traditional dances and sleep in their church kitchen. 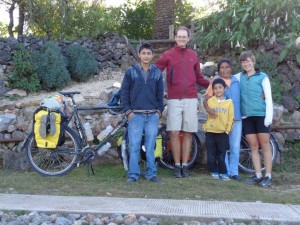