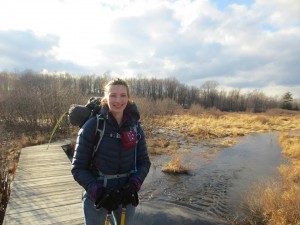 The West Loop of the Allegheny Front Trail is a 31.5 mile hike that hits the highlights of the AFT, but can be done at a leisure pace for a nice weekend trip. At the end of Penn State’s spring break back in March, we had originally wanted to ski the AFT, but with the weather reaching the 60s, we decided to change our plans and hike The West Loop instead. That’s the nice thing about the AFT: any time of year, it has what you’re looking for.

Our first day got off to a rocky start. The weather was beautiful with plenty of sun, but by the time we got out to the park it was nearly 1 pm. We had some difficulty finding the trail head due to a change in the color of the blazes since our guide instructions were written.

Though we were hiking, we had been warned by numerous people of the deep snow and ice along the trail,  and the progress we made was slow, but very scenic. We encountered a porcupine within the first four miles of our hike and had other views along the beautiful Shingle Mill Trail before continuing onto the AFT. After a brief, but steep climb, the snow thinned and we could move faster along more established roads. Towards the end of our day we walked along the Red Moshannon, which still had huge pieces of ice laying in and around it, stained red from the iron-rich water. With several old mines in the area acting as the sources of the iron, the whole creek is turned a muddy, acidic brown.

As the sun started to set we made the steepest climb of the trail, providing us with a good view of the creek and the surrounding area before we descended and set up camp in the dark next to Six Mile Run. Because of our late start, we were only able to get through approximately ten and a half miles for the day, leaving us a daunting twenty more for the next day.

In the morning, it became apparent that muscle strains were becoming a serious problem. We discussed cutting our hike short by taking Rt. 504, which we would cross in a few miles, all the way back to the car. However, we ended up deciding that we were up to the challenge and wanted to make sure we finished. We didn’t set off particularly early, but we figured that with keeping a fairly slow, two mile-per-hour pace, we should we done with plenty of daylight.

The next section of the trail was completely brutal. What in summer would have been a lovely stroll over some slight rolling terrain turned into a time-consuming struggle, as we tried to keep our footing over nearly continuous black ice for the next six miles. We crossed Rt. 504, anticipating a much easier trek on old railroad grades, but the situation was the same with the ice, only steeper. When the ice finally dissipated, it gave way to wet knee high snow for several more miles through woods, which is where my morale began its downward spiral.

The varied terrain of the trail made for continuous hope – at each new section we would hope for less ice, shallower snow, or the next road crossing. Seeing animals provided some enthusiasm, and we saw plenty of deer, another porcupine, and a ripped off porcupine tail at one point. The most bizarre and puzzling image that we witnessed was at Wolf Rocks. We’d seen plenty of scat on the trail, but nothing even remotely compared to what we saw in the rocks. It was as if a hundred porcupines had collected all of their feces for an entire year and stored it in the rocks. It was literally pouring out. I am at a loss of how so much could have gotten there. 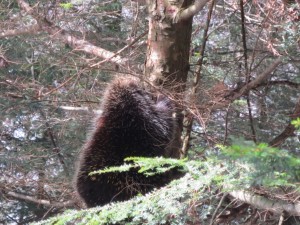 Unfortunately, passed that hilarious and slightly unsettling landmark, there was little to keep me going motivation-wise. The next part of the trail that I had desperately wanted to see was the Moss-Hanne Trail, but that was not for several more miles. Making myself walk the next section of the trail, which was rather redundant and difficult, was the lowest point for me.

Things did turn around a bit since gradually there was less snow and little elevation change. We made good time moving over access roads, but were slowed down by an incredibly snowy bog that seemed to stretch on forever. We were close to the Moss-Hanne Trail though, which I knew had boardwalks. In my mind they would be clear, easy, and flat. Like moving walkways compared to the rest of the hike.

By the time we actually reached the Moss-Hanne, it was later than we had hoped. We were exhausted, and considered taking a shorter trail that would lead us back to Julian Pike where we could walk back to our car. The idea of the boardwalks kept me going though, and we decided to push on, passing our one set of trekking poles between us when one of us got too tired.

Of course, the boardwalks were not clear, but rather covered in wet, slippery snow, and the ground between them was made up of deep puddles. We were moving at an absurdly slow pace, and running out of daylight. Even though we had food, water, and equipment to camp, the most frequent thought running through my mind at that point was that we were going to die out here, that we would never make it back to the car. As I said, my morale was spiraling downward.

Thankfully, we soon began to see signposts indicating how far onto the trail we were. It started at mile 4. It seemed to take hours to get to mile 3, but after that we really picked it up. I’m not sure where I got the energy, but before I knew it we were at mile 1, and then we’d gone two more miles and hit Indian Trail. After a short, unappreciated stroll on the last boardwalk, we were back on the road that would take us back to the car. That last mile was completely in the dark, and the pavement was brutal after the soft snow and mud, but much faster to walk on.

When we got back to the car, and for several days after the trip, I couldn’t believe we’d actually done it. We hiked about twenty-one miles that second day, almost entirely through ice and snow. It was one of the hardest things I’ve ever done, and looking back at it, I am 100% happy that we made it through the entire trail. That being said, it’s tough to recommend following in our footsteps; in fact, I’d advise against it. On the icy sections of the trail there was serious risk of injury, and the second day couldn’t at all be classified as fun between the fatigue and muscle injuries. Despite all that though, it is nice to know what can be done when you put your mind to it, and it makes it even better when it hurts a little.

My advice to completing this trail is, first of all, not to do it in the winter without proper hiking equipment, such as trekking poles, snowshoes, and crampons. You’ll definitely want to make sure everyone has their own set of equipment and not passing poles back and forth. Be sure to set a challenging time frame if you do it this summer or in more pleasing weather. When you aren’t dealing with snow and ice, there isn’t a great deal of elevation change, and the feeling of accomplishment is worth the difficulties. Finally, and perhaps most importantly, make sure to take a camera. The trail is absolutely beautiful, and you will see plenty of animals and even some interesting sights like the scat rock we saw. 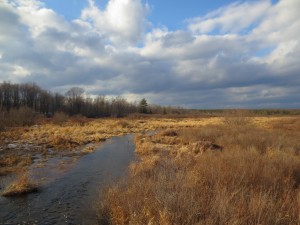